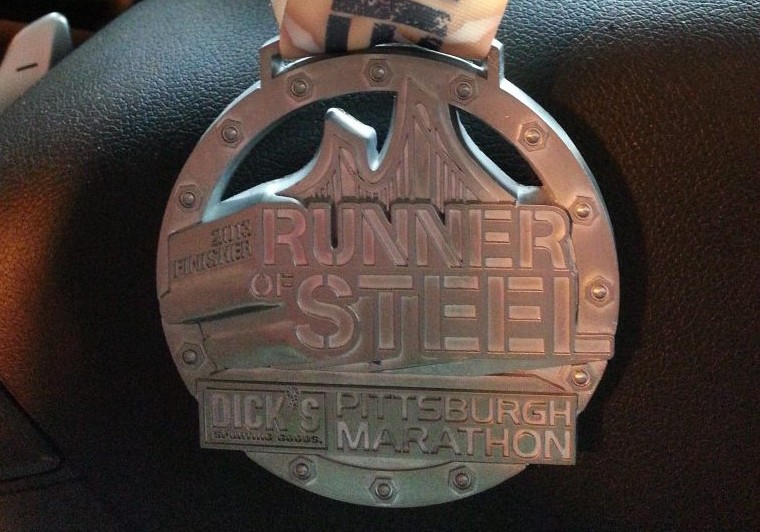 My sincere apologies for not keeping up with the blog as much as I wanted to recently. I have been traveling quite a bit to many different races and events, and just haven’t spent the time here I’d like to. Updates will be coming more frequently here as time goes on. I will use this space to recap the Pittsburgh Marathon, and will put out a new entry for the Raleigh Ironman in the next 24 hours.

My last run entry recapped my adventure at the Grand Canyon, completing the Rim2Rim2Rim challenge a little over a month ago, with the lead-in into all of the events in May I would be participating in. I didn’t have much recovery time built into my races through April and May, as I had something going on pretty much every weekend, including the R2R2R and then turning around the following weekend to do the Pittsburgh Marathon. I wasn’t sure exactly how I would respond to the marathon, having done the R2R2R the week prior, and about 8 miles into the race I could feel my quads burning pretty good from the Grand Canyon excursion. A funny thing happened on the way to the finish however.

First, Pittsburgh put on a heck of a show for the Marathon. The expo was well attended and organized, and I was grateful for Fleet Feet in Pittsburgh for providing me with a table at their booth to display my books on the Saturday prior to the race. I sold a number of books while I was there, and had some great conversations with people about the journey and the amazing heroes I did it for. I also spoke to the Nathan reps while I was there, and traded a copy of Freedom Run for their new VaporWear Vest, which I cannot wait to try out at my next ultra at Highlands Sky on June 15th. The race itself was well designed and gave you a great tour of the city and the many bridges they have over the river there. The weather was pretty much perfect that morning when the thousands of runners stepped off, and since I had submitted a 3:30 run time (wasn’t sure how I’d actually do, but that was my time from Richmond in 2009), I was placed in the “A” wave to start the race. About 200 feet in front of me were the elite racers, of which I barely caught a glimpse of, and continue to amaze me with their speed and endurance.

I stepped off in my new Brooks PureFlow 2’s, which Two River Treads hooked me up with to try out, and fell in love within the first 10 miles of the race. I had run a few miles in them over the weeks leading up to the race, taking it easy as I was moving from a 12mm drop shoe to the 4mm drop, which is a significant change. I wanted to take it easy transitioning into them, and it worked out very well. I didn’t have a lot of people to move through as we took off, and quickly found myself running along with a big smile on my face, knowing I only had 26.2 miles to run today. No ultra on this day lol!

With security being tighter after Boston, it was great to see so many people out to support us and the efforts Pittsburgh went through to make sure the racers had an incredible experience. Every soldier I passed that was volunteering that day to be out there received a high-five from me as I passed them by. No matter if it adds seconds to my race time, I want to always make sure I’m thanking those that protect us every day. I found myself going back and forth along the full 26.2 miles from one side of the road to the other, giving a “Thank you for your service” to each service member I passed. It’s why I do what I do.

As I made my way through the first half, I felt really good, but could certainly feel the effects of the R2R2R from the week before. I drank as many fluids as possible at each aid station stop, of which there were plenty, and just focused on the fact that the pain would only be there for a short while. The back half of the race started climbing a bit, moving towards the north side of town into the hills, but was still relatively flat once we got to about mile 16. People continued to cheer us on as we ran along, and I kept a steady pace as I moved down the road. I never wear a watch when I run, but noticed the times at the halfway mark were a little slower than Richmond, but the 20 mile mark was a bit faster than my pace then as well. Then mile 21 came.

I’m not sure what made me think of it at this point. I’m not sure if people thought I was insane when it happened. But anyone who was around me or saw me running by must have thought something was up because I literally started laughing out loud. I could not help it.

I immediately flashed back to Richmond in 2009, my first marathon. I remembered getting to that point. I remembered how tired and groggy I felt. How at some point I just didn’t think I could keep my pace up. I slowed down then. I walked through the aid stations. I kept moving forward, but I just didn’t have the kick in me that I wanted to have. But here I was, now at mile 21, and I felt great. I started laughing when I realized how crazy it sounded to say “I only have 5 miles to go”. That became the norm when I did the run last year…not worrying about the distance that day until I got about 5 miles to the finish. Then I would start counting down. Or when I race the ultras, and am finishing up a marathon distance, getting ready to start my 2nd, 3rd, or even 4th for the day. My mindset has been completely changed.

And I continued to laugh.

Around mile 22 we started on a nice little downhill charge, and I could feel my pace picking up. The flats came in around mile 24, and I continued to push harder. Only 2 miles to go I told myself, and I feel great. 1 mile left, and I can hear people at the finish. Crossing the finish line, I looked up at the clock, and realized I just ran a 3:27, 4 minutes faster than I did Richmond a little over 3 years ago.

And I hadn’t run the Grand Canyon the weekend prior.

My good friend Aaron sent me a message later that day…”At least you tapered! LOL!” was all he said. I couldn’t help but think to myself, what if I wouldn’t have done the R2R2R the week prior. I could have taken 10-15 minutes off my time if I really tried. I was elated to get the time that I did, and realized that this could be the beginning of a great race year for me. I have a string of marathons to go through this fall to see if I can do just that.

Thanks so much to the city of Pittsburgh for the event, and can’t wait to get back to do it again soon!